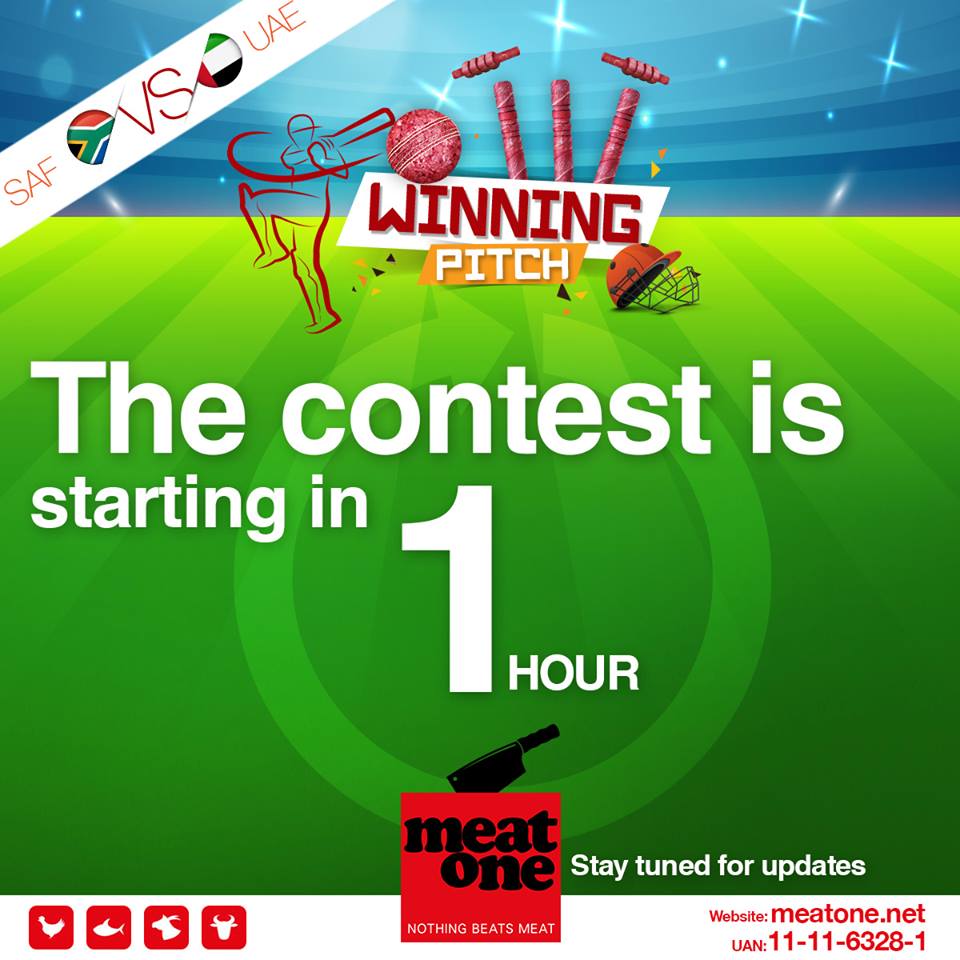 The ICC Cricket World Cup 2015 is back after four years to entice, enthrall and entertain all of Pakistan. Endorsing Pakistan’s passion for the game, Meat One’s introduces its new campaign- ‘#WinningPitch’. The campaign captures the soul of the matches which grips Pakistan when the ICC Cricket World Cup 2015 is on and that is everyone is an expert cricket analyst by making them predict the outcome of the match and win prizes if they’re right.

This year, the tournament is taking place in Australia and New Zealand with matches being broadcast anywhere between 3:00AM and 12noon, Pakistan time. When the matches are being played, many cricket fans across the country will be stuck at offices, day jobs and their daily schedules … which means the best channel to reach these audiences would be Facebook, a platform of over 18 million users in the country and Twitter, a lessor but more influential audience.

‘#WinningPitch’ campaign will unfold with a power packed outreach and engagement plan. In the last few years, with the rising consumption of digital media especially on social channels such as Facebook & twitter has fragmented viewership from traditional channels. ‘#WinningPitch’ will strike a chord with fans across the country wanting to prove their expertise in the World Cup games. It captures the behavior that the ardent cricket lover who lives, breathes and eats cricket feels when their favorite game is on. Already the campaign has an engagement rate of 39%. 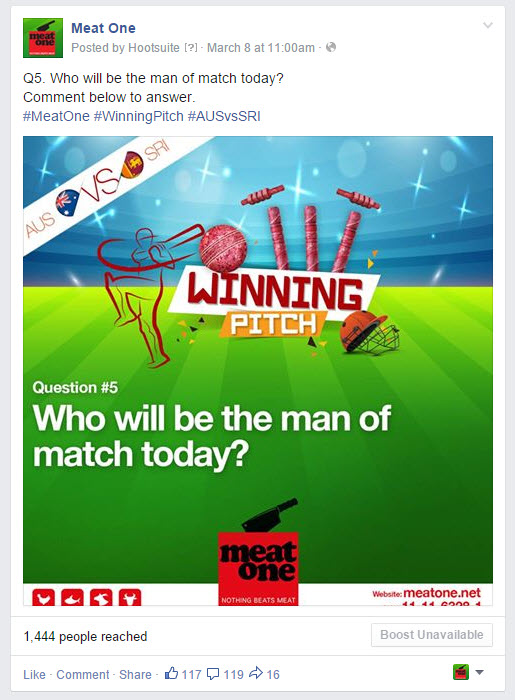 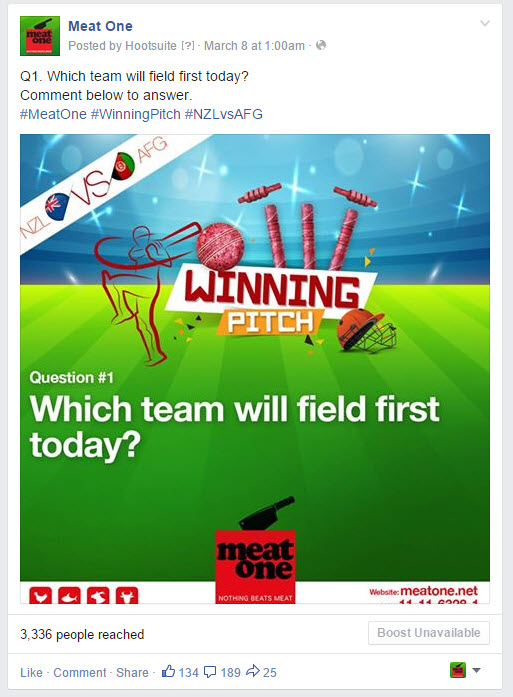 Adnan Hussain, MeatOne Pakistan said, “Cricket has been a great unifying factor and the fever that grips Pakistan is unmatched. This is the perfect time for us therefore to get the perfect opportunity to start the year through a digital marketing campaign, ‘Meat One #WinningPitch’. This campaign offers a Meat One the powerful insight of everyone believing themselves to be an expert to appeal to consumers. We are also giving away meat platters during the live game thus enabling consumers to enjoy the game of cricket using with the great taste of Meat One” 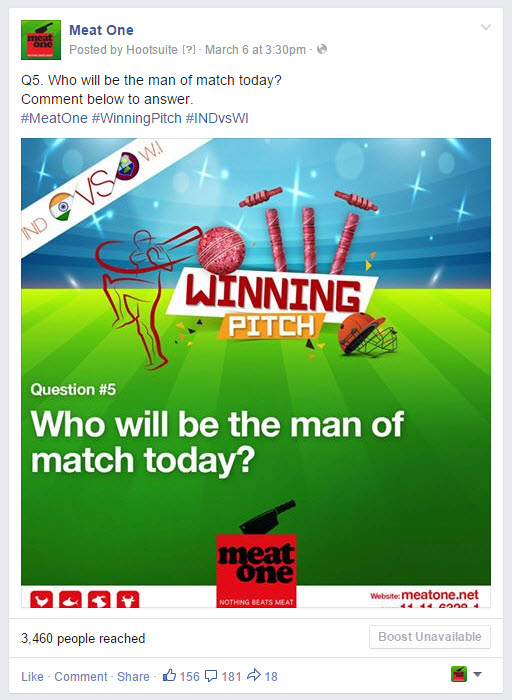 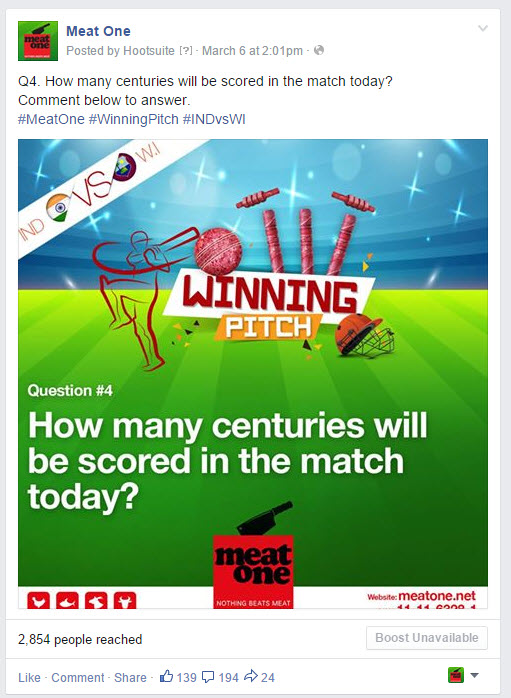 Speaking about the campaign, Umair Mohsin, Director Media Idee said, “The campaign idea of ‘Meat One #WinningPitch’ brings together the love for Meat One and love for the game of cricket. We are capturing a very pertinent insight of our audience during the ICC Cricket world Cup 2015 and we’ll be tapping the consumer perfectly live as they watch the match.#Winningpitch features a simple gameplay of predicting the outcome of the cricket match based on questions we ask earlier and then rewarding people who were correct. It’s the simplicity that will appeal to people the most.”

With a vow to supply supreme quality meat, Meat One is the very first of a new, specialized chain of meat stores in Pakistan. Meat One is a subsidiary of the Al Shaheer Corporation, a very successful venture that has been exporting meat to the Middle East and GCC countries since 2008. We presently operate 12 outlets across the city of Karachi, 1 outlet in Lahore and 1 outlet in Islamabad. Retailing export quality beef, lamb and mutton, Meat One is the first of its kind in the meat shop space. The meat is supplied by our own abattoir located in Karachi, which currently exports beef and mutton to the Middle East. This plant is certified by health and food import departments of most Middle East and GCC countries. The free range, lean meat that Meat One offers you every day is natural and wholesome!

Read more about Meat One at www.meatone.net. 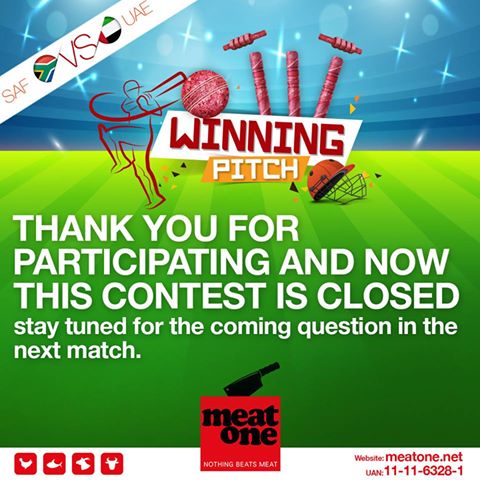 Some more examples from the social media marketing campaign are below: 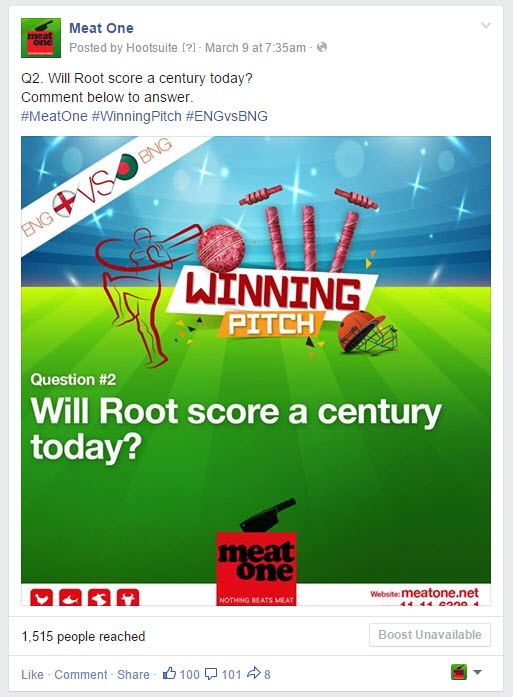 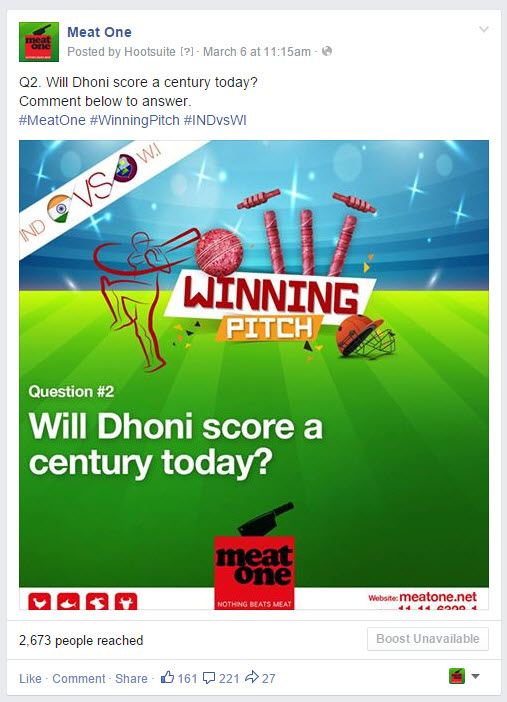 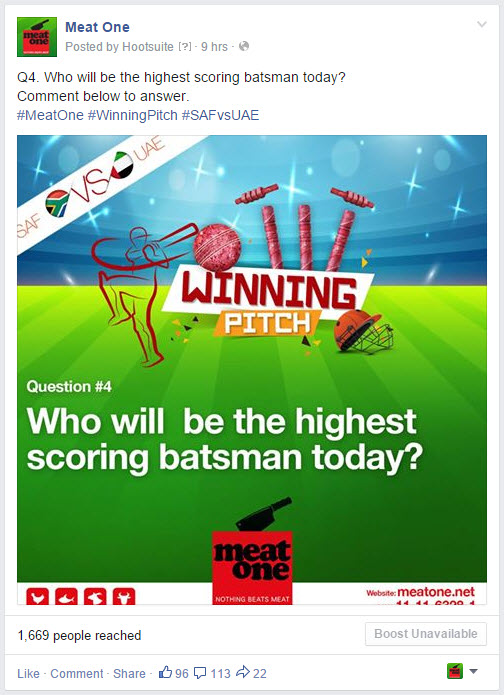 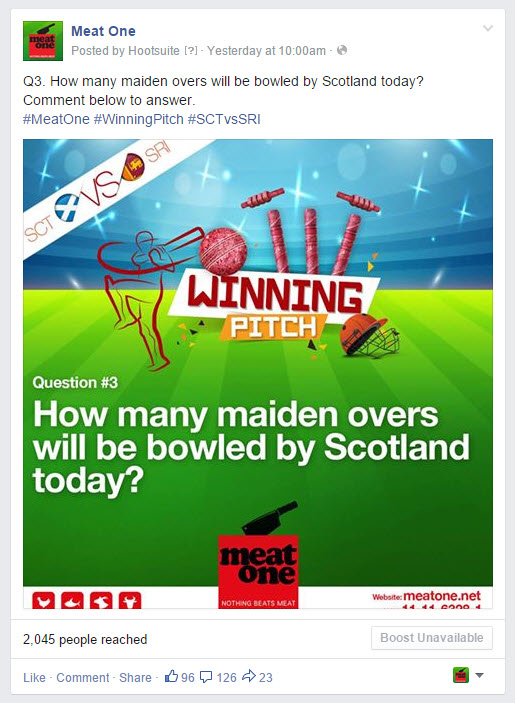